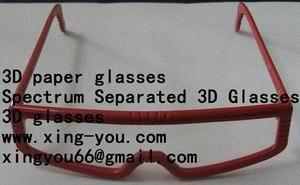 Firework glasses
Fireworks Glasses let you view your world in bright new colors. The rainbow burst will amaze you. Printed in exciting full color graphics with educational information on the back. Fireworks Glasses are great for watching Fireworks displays, Holiday Lights, City and Street Lights and even the Moon and Stars. Also, it works on the bubbles which under the sunshine, appear patterns.
Other 3D Glasses
The Original Laser Viewers - Specially treated holographic lenses break light into the spectrum. An exciting addition to fireworks displays, laser light shows and holiday celebrations everywhere.More than 200 million people have viewed fireworks and laser shows wearing our 3D Fireworks glasses. These eye-opening glasses have specially treated lenses that bring the light show to your face. Fireworks will never be the same.
Holographic diffraction grating lenses that break light into the spectrum or rainbow starbursts. For viewing fireworks displays, laser light shows, holiday and city lights and for the study of light and color. Millions of people around the world have been dazzled by Fireworks Glasses and the amazing effects that bring fireworks and the rainbow spectrum excitingly alive.